You don’t question the things you see every day in your home town or city, precisely because of the fact you see them every day. They’ve become “normal.” But let’s remember what Sherlock Holmes once famously told Dr. Watson:

“You see, but you do not observe.”

Why don't they refrigerate their eggs?

According to the Egg Safety Center in the United States, the law says that producers must sanitize eggs before they reach the consumer as the best way to fight Salmonella contamination. The washing process removes contaminants but also removes the natural coating of the egg, the cuticle, leaving the shell porous and thus vulnerable to bacteria. In Europe,eggs do not require extensive washing, which leaves the cuticle intact, which makes them safe to be sold and stored at room temperature. Fascinating, right? Something I always wanted to know (but was afraid to ask)!

Another thing about eggs: In North American supermarkets, eggs occupy a football field of shelf space. Here in Venice, you have to send out a search party to find them—Oh, there they are! On the bottom shelf! Behind the pillar! (Literally) Why? Most North Americans eat eggs every morning for breakfast. Italians don’t. (They eat pastry.)

What's with all the winged lions?

Do you know which symbol represents the nation of Austria? If you answered “double-headed eagle,” give yourself a gold star. So, one day, the Austrian ambassador, remarking on the symbol of Venice and being slightly condescending toward his Venetian host, asked him, “In what part of the world can one find winged lions?” The Venetian replied with a smirk, “In the same country you find double-headed eagles.” But why are there so many winged lions in Venice? They’re everywhere, from large statues to little door-knockers.

Answer: Back in 1260, the winged lion began to represent St. Mark, the evangelist and patron saint of Venice. Then the lion became a political image to represent the power, majesty, and freedom of Venice. Sometimes the lion holds a book, sometimes a sword, depending on whether Venice was at peace or at war.

Did I make a mistake?

Ever go to a restaurant in a foreign place and laugh at the hilarious English translations on the menu, like “chest of chicken” or “broccoli salad with pee shoots"?

Why didn’t the owner get it checked by an English speaker before going to print?

Here’s the answer: Laziness! I know it’s hard to believe, but I made some mistakes in my first blog (shameless link to "Boats of Venice") and find myself guilty of the same crime as the restaurant owner. My friend and producer Andrea has not-so-kindly pointed out that the plural of palazzo isn’t palazzos, it’s palazzi. Ambulanzas, non. Ambulanze, si. It’s a tabacchi shop not a tabbachi. And more than one vaporetto aren’t vaporettas. They’re vaporetti. This kind of sloppiness will not happen again!

Will you ride with me in my gondola, sweet raviola?

First, let’s get in the mood. May I present The Volunteer Firemen from 1926 performing “In My Gondola” (For Dancing Fox Trot!). Warning—with lyrics such as “You can funiculi, and I’ll funicula” you will not easily get this tune out of your head! The lyrics don’t actually begin until the 1:12 minute mark, but they’re worth waiting for!

So, why are gondole (not gondolas, see, I’m learning!) always black? What’s the deal with the strange ornament on the front? And what about that thingamajig the oar rests on? The ferro, the prow emblem, represents the turns of the Grand Canal and the Rialto Bridge. The six fingers stand for the six districts of Venice, and the opposite one stands for Giudecca (the island next to Venice). The upper part symbolizes the Doge’s hat. 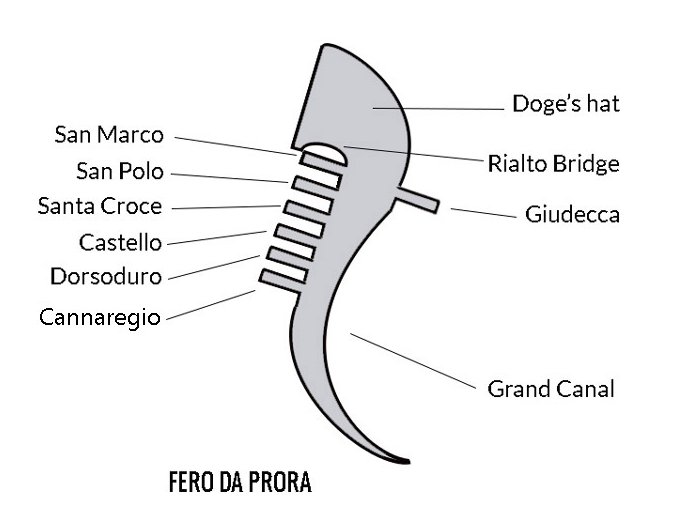 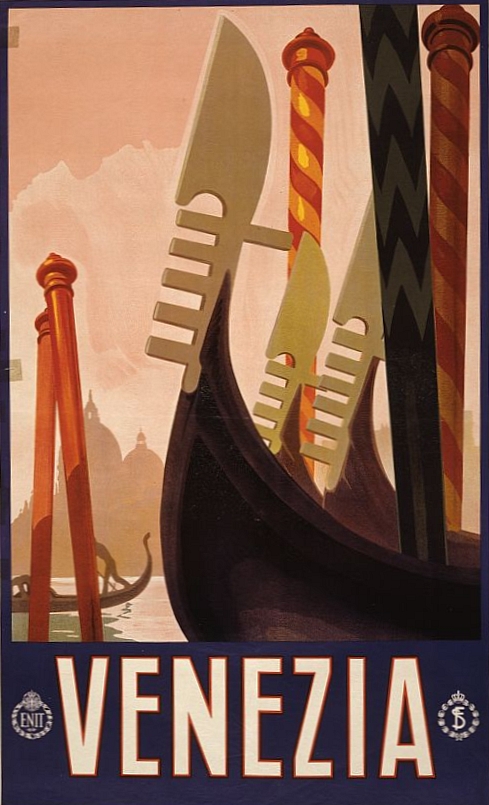 By the 16th century, so many different-colored gondole cluttered the canals that they began to look chaotic, and so in 1562 the city passed a law saying all gondole were to be painted black.

The forcola, or oarlock, provides a function unlike the circle-on-a-stick oarlock on row boats. The forcola craftsmen specially bend and notch it to offer different nooks in which to place the oar for different kinds of rowing. Dating from the 1600s, the Squero di San Trovaso remains the oldest and one of only two squeri, or boatyards, still operational in Venice. Back then, more than ten thousand gondole crowded the canals of Venice. Now, fewer than 400 remain, and only 10 new ones get built every year, at a cost of approximately 40,000 Euros each. Gondole require regular maintenance, which explains why the Squero di San Trova still operates. Sorry, the boatyard isn't open to the public, but you can still eyeball it from across a little canal. Fortunately for those of you not able to visit Venice in person, we plan to use it as a film location in our upcoming feature production of Ernest Hemingway’s ACROSS THE RIVER AND INTO THE TREES, because this place hasn’t changed at all since 1946, when our movie takes place. In fact, it hasn’t changed much over the past 200 years!

A side-note about gondoliers—you can trust them! Historically, because of their daily contact with the aristocracy, gondoliers became the link between the noble class and the common people. Because they couldn’t find hotel rooms, nobles would carry out their illicit affairs in gondole (in a small enclosed cabin in the middle of the boat called a felze). And so gondoliers became reliable secret-keepers.

Speaking of romance, let’s go back to 1954 with “Gondola Nera.” I’ll wait while you put it on the RCA phonograph by clicking here and pressing play.

Why do people look down on me?

Many buildings have faces protecting their doorways. Some appear benevolent, some downright scary. These “people” protect the inside from the evil outside.

I see photos of dead people!

Instead of putting obituary notices in newspapers, Venetians inform others of passings by affixing 8x10s on walls, usually on churches.

Does the Leaning Tower of Pisa need friends?

Venice can boast of having four leaning towers! Maybe because the city floats (shameless link to the "Floating City" blog)?

Santo Stefano ranks as the third largest monastery in Venice. Built by the Augustinian Hermits in the 13th century and one of the finest examples of Venetian Flamboyant Gothic architecture, the leaning tower stands 66 meters (216 feet) high. In 1902, an earthquake damaged the bell tower, and it leans with an inclination of 2 meters (6.5 feet) ever since.

The Greek-Orthodox church Saint George of the Greeks, built in the mid-1500s, also enjoys a leaning tower, as do the Campanile of San Martino church on the island of Burano and the Campanile of the Basilica di San Pietro di Castello.

What's up with the WC?

In a Canadian restaurant or gas station, we call the toilet the washroom or the restroom. In the U.S., when I ask for the washroom I usually get a blank stare and then, “Do you mean the bathroom?” as if I would take a bath there, even if I could. On a boat, the toilet’s called the“head.” What does that even mean? And in England they call it the “loo.” Insanity! But here in Italy, the signs read“WC,” which stands for "water closet." I ask you, water closet? And I also ask, why don’t Italians have their own word for washroom? Why do they use English words, ones that don’t make any sense, and then use them in an acronym? Why didn’t they just adopt the word “toilet,” a word meaning the same thing in almost every language?

So many important questions, so few answers.

Will you tell me the story behind the bridge of fist fights?

Okay. Since the 1300s, two rival Venetian clans, the Castellani and the Nicoletti, held fist-fights for the conquest of this one specific bridge. Of course, railings did not exist back then, so the fighters often fell into the canal. In 1705, the city officials outlawed these battles due to their increasing ferocity and the number of dead and wounded. Nowadays, you can see footprints on the four corners of the bridge to commemorate this historic rivalry. 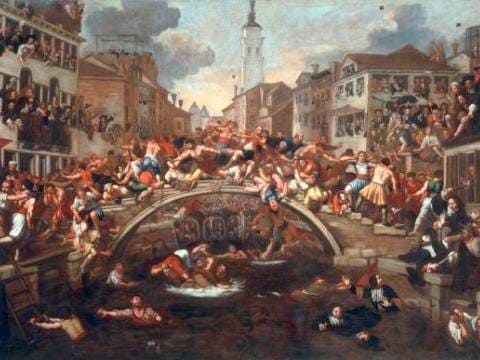 What do barbershops, the Arctic, and Venice have in common?

They all have poles! Pali da casada literally means “poles of the family.” Originally, they were erected in front of palazzo water doors, with oil lamps on top, to make sure that visitors could see their destinations at night. The poles also functioned as decorations, the colours representing family colors.

No matter where we happen to find ourselves at any moment in time and place, we have the ability to look around us with the curiosity of a tourist, even if we have lived in the same place for our entire life. Every corner of the world is made up of a myriad of little details. My new goal is to be more like Sherlock—I intend to not only see but to observe the world around me.

A Stroll Through Cities Shut Down By the Pandemic