The Boats of Venice

I arrived in Venice, Italy, on March 12, three days after the country-wide lockdown was put into effect. At Marco Polo Airport, arriving passengers were tested for fever, one by one, and then had to fill out forms as to why we were coming to the city.

I came because my friend and producing partner, Robbie, was here, and we were going to commence soft-prep on a feature film we planned to shoot this summer, based on Ernest Hemingway’s last novel ACROSS THE RIVER AND INTO THE TREES. A couple days prior, I had been in Madrid (leaving Spain two days before their lockdown went into effect), where I took a train to Zaragoza, an hour and a half away, to have lunch with the director, Paula Ortiz. Her passion and vision for the project had me stoked, and I was anxious to get to Venice and start setting things up for the production. Robbie and I had decided a few weeks earlier that we would come to Venice and commence soft-prep so as to be the first production out of the gate when the lockdown was lifted. We thought it would be a few weeks.

By the end of April, most people in the film community were in agreement that no international production would happen before September and, even then, with severely limiting protocols—sterilizing the set three times a day, social distancing (how do we do a love scene?), reduced crew, no sharing of tools, masks and gloves for everyone (actors?!), rapid tests for every crew member at the start of each day (where are these tests?)—all of which would add hours, days, and weeks to schedules, which would then translate into higher budgets. That’s not just my problem—that’s an international problem.

Anybody have a project we can shoot in Antarctica?

So what have I been doing while under strict lockdown in Venice? Listen, I’m not complaining. I’m in a cool little bachelor pad whose windows and water door (the main entrance for most palazzos where, historically, residents and guests arrived by gondola. Only lowly servants, deliverymen, and producer-types used the street entrance) overlook the Grand Canal.

This particular joint is called the Palazzo Mocenigo. It’s a three-building complex now split up into a bunch of private apartments (as are most of the fine palazzos in Venice), centered by a garden courtyard. Once upon a time, the whole shebang belonged to Giovanni Mocenigo, a Doge of Venice during the 5th Century.

The English poet Lord Byron had been forced to leave England because of his debts and sexual scandals and lived here from 1818 to 1819 (together with 14 servants, 2 monkeys, one fox, and 2 bulldogs). There’s a plaque on the water side of the building that commemorates this, but I haven’t been able to look at it since I haven’t been on the canal since my Alilaguna boat ride from the airport five weeks ago.

Like all cities around the world during the Covid-19 pandemic, Venice is eerily empty. The exceptions are people shopping for groceries and pharmaceuticals. (Yesterday, the new lockdown laws allowed bookstores to open. Bookstores! Can you imagine the reaction in Georgia or Florida if the governor announced that the first loosening of the lockdown was going to be bookstores?! I mean, can you?!)

Having been in Venice for many months over the past few years, I’m not at all disturbed by its present desolation. It’s actually much more beautiful; in 2018 there were 4.5 million tourists in a city where the local resident population is only 55,000! Walking the streets and alleys and bridges of Venice is normally like negotiating 5th Avenue at lunchtime.

And so with the canals. The waterways of Venice are normally cluttered with hundreds of boats of all shapes and sizes negotiating the 150 canals that intersect the city, from the mighty Grand Canal to little cul-de-sacs.

I enjoy a daily cigar. Okay, since I have more time on my hands now, twice daily. But cigar stores are closed. Luckily, a few Tabbachi shops are open. And they sell these things called Toscanos. In 1818, a bale of Kentucky tobacco leaves that had been drying in the open were caught in an unexpected downpour of rain. The wet tobacco started to ferment in the summer heat. It was decided that, instead of being thrown away, the fermented tobacco should be used to produce cigars to be sold in Florence, and the Grand Duke of Tuscany, Ferdinand III, founded a tobacco factory. Toscanos gained popularity amongst Italians and, today, a variety of Toscano cigars are sold nationwide. (My research has not uncovered any explanation as to why Italians developed a sudden hunkering for wet, fermented tobacco.)

The long Toscano is too much for one sitting (it’s actually pipe tobacco), so most Italians rip them in half. Being a genteel Canadian (in my mind, anyway), I use a cigar cutter. So, I smoke one half in the late morning in my courtyard garden and the other half during the late afternoon when the sun has peeked around the western corner of my palazzo and hit the water door dock.

I sit on my dock and smoke a Toscano. And look out at the Grand Canal. And watch the water traffic go by. There aren’t that many boats right now because of the lockdown but, because I can now see the trees for the forest, I’ve become obsessed with them. (The little dock on the right side of the picture below is my Tobacco Road. The Byron plaque is up and to the left. And the Boston Whaler beside my dock is still parked there—I wonder who it belongs to?)

And that brings me to my latest obsession. Boats.

I started my boat obsession quite innocently—counting passengers on the passing vaporettas (buses). When I first arrived in mid-March there were an average of 4 people, not including the boat driver and the ticket-taker. Now, understand, the normal capacity of a vaporetta is 230 souls and, in the past, I rarely saw or travelled on one that wasn’t packed like a Tokyo subway car (so I’ve heard because I’ve never actually been there). During Easter weekend, when all travel was prohibited and grocery stores were closed, there were vaporettas with no passengers at all. Now, I’m starting to see upwards of 10. So, life is loosening up!

My boat obsession broadened to the extent that every time a watercraft approached I watched, mesmerized, as if I was seeing Peter O’Toole emerge over the top of an Arabian sand dune. And then I began to categorize them.

I learned that Venice has a lot of different police boats. There are the federal Polizia, the Polizia Locale, the Carabinieri (military police), and the Guardia di Finanza (treasury agents). Yesterday, I saw two policemen on Jet Skis! How incongruous!

I started making a list. What does a city that lives on water need? Ambulanzas, mail delivery, couriers, garbage pick-up, fire, taxis, even a green bin collector—all the vehicles that we take for granted in our hometowns are here . . . on boats.

There’s one boat I haven’t been able to capture on film. I only saw it once out my window, and I didn’t have my phone handy. I’m still waiting to see one again and add it to my collection. The Polizia Penitenziaria—a Venetian paddy wagon! Why do I find that exciting? Do you think Toscanos are going to my head? Have I been here too long?

I want you to know I’ve been respectful of my Venetian hosts. I go for a daily constitutional, but only in my hood, per the law. I venture out for groceries (and Toscanos). Okay, in the interests of full disclosure, Robbie and I did go one day to the The Hotel Gritti Palace on a mission where, luckily, we found our buddy, the manager, on the deserted terrace eating lunch. We cajoled a couple of proper martini glasses from him—mission accomplished. Are you judging me now? I don’t mind telling you, I feel totally justified breaking the law on this quest to cop illicit martini glasses. Because, did you know Hemingway wrote ACROSS THE RIVER AND INTO THE TREES right here in this hotel in the (now-named) Hemingway suite? 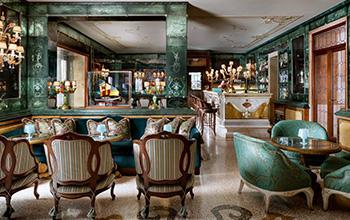 In fact, there’s a signed copy of the published book right there, under glass. And, of course, you know that Hemingway’s cocktail of choice was a martini. And to this day (well, when they’re actually open), they serve a Hemingway martini at the Bar Longhi in the Gritti, where we can only imagine Ernest had a few. And Robbie's and my favorite cocktail is the martini. So, is all this a coincidence? I think not.

Look, we’re in lockdown. Some people are learning how to cook, others are binging Netflix. I’m into Hemingway martinis. And Toscanos.

And the boats of Venice.

Opinion: Be A Voice For Unity

Finding Illumination During the Pandemic