How to Heal a Broken Heart

It’s been a tough summer at my house. Not to start our conversation out on the negative, but I’m honest and transparent and I think the background matters.

In early June, I woke up, along with the rest of the world, to the devastating news of Tony Bourdain’s suicide. It broke my heart in so many places. He was less than a block away from my sister-in-law’s home and restaurant when it happened, and his last meal was the choucroute—the national dish of Alsace. The first time I tasted it was Tony’s version served as a special at his restaurant, Les Halles.

It was also a signature dish that put my husband, chef Eric Klein, and me on the cover of the LA Times restaurant section. In the photo, we're making the choucroute. So, I guess if you’re going to die—that’s a good last meal. It’s enough for 3 days even if you share it.

Tony embraced my boundless enthusiasm for the culinary arts in ways both kind and cajoling. I had no formal training, but he never shamed me. He guided me like a parent does with a rambunctious child. He laughed and teased me because I made lots of mistakes. Not a lot of people wake up in the morning and decide to start a catering business without culinary training. But, by the time we met, I was already comfortable cooking for a hundred people before I’d learned to cook for two—I still struggle with that issue, truthfully.

He started out simply, answering my random questions. Then he’d linger at the table longer to chat. I’m a self-taught caterer from Pine Bluff, Arkansas. It’s a world of experiences far away from his, and we became unlikely friends. But in typical Bourdain fashion, he’d just sit down with a glass of wine, fill my glass, and ask me questions, too.

I told him everything—what I knew, what I desperately thought I needed to learn. He took it upon himself to teach me the basics: stock, browned butter, simple things, short cuts . . . components that could be incorporated into dishes for a hundred or more. He never got frustrated or put out. He was kind and caring. He was the one who taught me to love foie gras, mussels, hanger steak, cassoulet—real French food and French wine. Most folks assume it was Eric, my husband, who taught me those things. But by the time I’d met Eric—the line cook who would become my husband—I had a serious culinary repertoire—validated by the likes of Wolfgang Puck—guided and framed by the kindness of Tony Bourdain.

I had a serious culinary repertoire—validated by the likes of Wolfgang Puck—guided and framed by the kindness of Tony Bourdain.

But again, in all honesty, there was nothing I didn’t love when it came to food, at least then—except tripe. I think Tony just enjoyed watching me eat. Like everyone, I struggled with how he could kill himself when to me, and to the rest of the world, he had it all—the life everyone wanted; certainly the life I wanted.

But what was now laid bare wasn’t what it was cracked up to be, and at the root of it all, he was unhappy. And that broke my heart.

Friends reached out, they felt and heard my cries. I was so incredibly sad. I had to regroup and refocus . . . but how? The only way I knew how. A friend called and said, “I can come over in a bit—help fill your day.” That was incredibly kind. I realized that cooking dinner for a friend and his daughter would pull me through one step at a time, one dish at a time. Just like I’ve survived so many other awful moments in my life. The reality is that life is hard; it’s glorious, but it’s not always pretty. Finding ways to cope so that you can enjoy another day above ground, I decided, was the lesson in his tragic death. I’ve not yet healed, or even come close. I wish I could say the tears have stopped. These things take time.

A week later, one of my closest friends, Deirdre, gave birth to a daughter. She had asked me to take care of her 11-year-old son, Dante, who has been part of my life since D and I became friends when Dante was about a year old. I had to get my act together.

Dante grew up around me and my Vizslas (think rust-colored Weimaraners).

He learned early on that days around me usually revolve around food. He’s still not a big eater, but he usually comes to me with a willing spirit.

I find such joy in simply watching him eat and try new things.

Literally, the moment he bit into his first egg custard tart, we got the text and photo from Deirdre’s husband that Dora was born, safe and sound with ten fingers and toes. 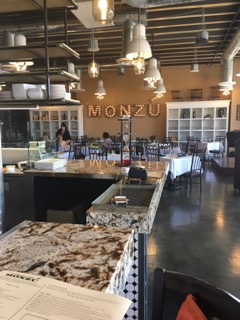 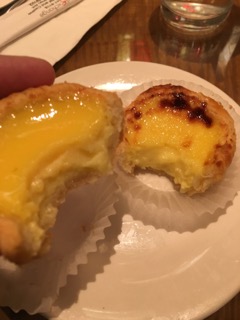 To celebrate, I took Dante for his favorite food—pizza—REAL Napoletano pizza from Pizzeria Monzu. By 7:00 p.m., we got the all clear to come to the hospital so he could meet his new sister. He was thrilled. Naturally, I’ll always connect Dora to egg custard tarts, even if Dante forgets. The look on his face and his wide eyes, the happiness about his new sister’s arrival, and the bite in his mouth were one and the same.

When I thought about it, the day made me realize that Dante had given me the experience I used to give Tony—the pleasure of watching someone eat something they’d never tasted before and watching the joy spread. Tony reveled in that long before he had a television show, and I think that was part of his magic.

Even if you knew how intrepid a traveler he was, you knew at his core, he treated each new dish with the wide eyes of a willing child. This time, I smiled and didn’t cry when remembering him. RIP Tony Bourdain

Note: Simmer the sauerkraut and the bacon stock at the same time, then heat the sausages and assemble the presentation.

1. Tie the bay leaves, juniper berries, caraway seeds, peppercorns, coriander seeds, cloves and thyme into a square of cheesecloth to make a sachet.

2. Heat a large skillet and add the onion slices. Cook on low heat until the onions are translucent but not caramelized, about 6 minutes.

1. Whisk together the dry mustard and water. Let stand for 15 minutes.

2. Place the mixture over a pot of simmering water and gently warm for about 1 minute (do not boil). Remove from heat and add the vinegar and honey to taste.

4 each viennoise, weisswurst, beer or garlic and Polish sausages

1. Secure the bay leaf on the onion with the 2 cloves. Put the stock and bacon in a very large stockpot, add the onion and bring to a boil. Reduce the temperature and simmer, skimming occasionally, until the bacon is very tender, about 2 hours.

2. Add the potatoes during the last part of the cooking and cook until tender. Remove the potatoes from the pot using a slotted spoon.

3. Add the heaviest sausages to the pot, then return the potatoes to the pot and add the remaining sausages. Bring the stock to a boil, then immediately reduce the heat to a low simmer and simmer the sausages for about 15 minutes.

4. To serve, remove the sausages, potatoes, and bacon from the stock. Reserve the stock for another use. Place the hot sauerkraut and potatoes in the center of a serving plate. Lay the sausages over the top. Thinly slice the bacon and add to the platter. Serve with mustard.