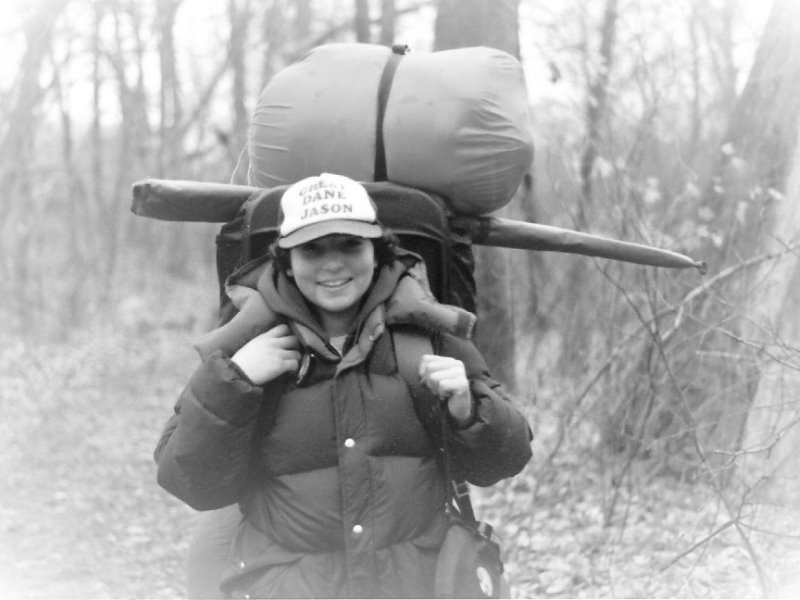 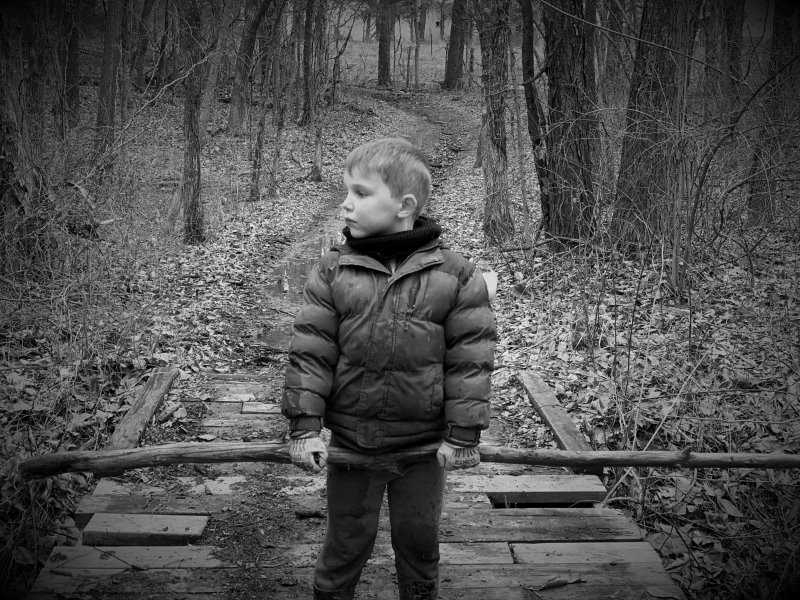 That is how long it took me to become a Great Aunt. That is when my nephew, Brandon, and his girlfriend at the time had a bouncing baby boy. He was born exactly two days before my fifty-second birthday. I was naïve; I had no idea what power such a tiny being could hold. No wonder his first outfit was of a superhero. He had superpowers. As Brycen is about to turn six this summer, I’ve learned that I lack the ability to say no, I can’t get mad, and if he asked for the world, I would use my last breath to give it to him.

Up until Brycen’s birth, I had been an aunt; I have two nephews, Brandon and Dakota. I had been a good aunt, a really good aunt, at least from my perspective. We did things together when they were young. I went to birthday parties, made decorations . . . I was the cool aunt because I brought their pony into St. Louis for their birthday parties. They spent time on the farm, where they got to be around all sorts of farm animals. We did fun farm stuff. How Brandon grew up to be afraid of chickens, I’ll never know (I must admit, it is rather amusing to see a grown man with STL, 314, and other tough stuff tattooed over his body run from a chicken while screaming out for his daddy. I will always get a good chuckle from that memory). Now that he has a son, Brandon will gladly walk around the chickens hand in hand with Brycen as they check for eggs or look for feathers. Inside I know he is a little apprehensive about being around the chickens, but he puts on a brave face for his son. That is what love does; it makes you overcome your fears for the sake of others.

Anyhow, as a kid, I grew up in St. Louis but had the good fortune to spend a lot of time on my grandparents’ farm. My brother, Mike, and I would cover that 40 acres a hundred times over. I didn’t realize at the time how it would affect every bone in my body and shape me into the person that I am today. We didn’t measure time in hours; the only time we knew was breakfast time, lunch time, dinner time, bedtime, and the rest was free time. As kids, we played, only limited by our imaginations.

Oh, we worked plenty on the farm, but it did not seem much like work. Helping in the garden was a daily event; picking beans with grandma or climbing a peach tree to knock fruit down to my grandpa. One of my favorite chores was cleaning out the chicken house. It smelled of ammonia when you dug the pitchfork deep into the damp layers of straw. I did not mind the smell. I guess like some folks do not mind the smell of gasoline, I didn’t mind the smell of chicken waste. Grandma would give me an old Folgers can full of lime to sprinkle on any damp spots before putting down fresh straw. I always felt like I had accomplished something huge. To this day, I still remember that fragrance. Now you know I didn’t mind the smell because I called it a fragrance.

Grandpa would let us follow him around as he tinkered on the tiller or changed plugs in his old blue Chevy truck. I learned all about how to fix things, Goop, and how to cuss. I learned that dirt under your fingernails meant you had a rather good day. Time on the porch swing and a nice cold glass of lemonade were rewards for a job well done. I also learned how not to burn my mouth when eating snickerdoodle cookies right out of the oven and that kindness toward neighbors and family was repaid in kindness. My grandparents were good about giving armfuls of veggies and home-canned goods to anyone who stopped off the road for a chat. In return, when my grandparents needed help with the barn roof, a section of fence, or anything else, there was always someone ready to pitch in.

By the time I was ten, I knew that I wanted to be a farmer when my Grandpa told me I couldn’t be a farmer after I complained about how heavy the five-gallon buckets of veggies were. It was mine and my brother’s job to carry the buckets of zucchini, eggplants, corn, and tomatoes from the garden to the porch. When I said the buckets where too heavy, my Grandpa chuckled and said I would never make it as a farmer. Granted I was ten, but those words flipped a switch in my head. Guess I have never been fond of being told what I can or cannot do. In the process of transitioning from city girl to country girl, whenever I pictured my farm, I envisioned my grandparents' farm and everything that I loved about it. My grandparents had a huge garden and orchard, a few chickens, a couple horses, and they sometimes ran my cousin’s cattle. We would visit my Uncle Gid’s place for even more animals. It was a lot like a scene straight out of a Ma and Pa Kettle movie: animals running all over the place. I LOVED IT!

Now as an adult, I can see that I am a lot like Peter Pan. I know I am aging. I can tell I’m aging every time I go to stand up. However, I have planted myself in the middle of twenty acres and surrounded myself with opportunities to relive childhood memories every day. I have recreated my childhood love—a farm where a kid can run amuck. My farm allows me to give my great nephew all the wonderful things that his grandpa, my brother, and I had growing up. It is as simple, basic, and pure as life gets. I learned young that it was not material things that made me happy; it was time and experiences. It was time with my grandparents, family, and friends, time in the woods, in the garden, fishing with my grandpa, going to the church picnic with my grandma, playing in the creek, jumping in the hay, climbing trees, picking veggies, swinging on the porch swing, collecting cicada shells, throwing rocks, digging in the dirt, riding bikes and motorcycles, running with the dogs, talking into the fan, watching wrestling with Grandma, listening in on the party line, helping Grandpa change a tire, running from bats under the dusk-to-dawn light, playing dominos; I could go on forever. It is not things so much as moments in time that shaped me; now I have that opportunity to provide time and experiences for Brycen. 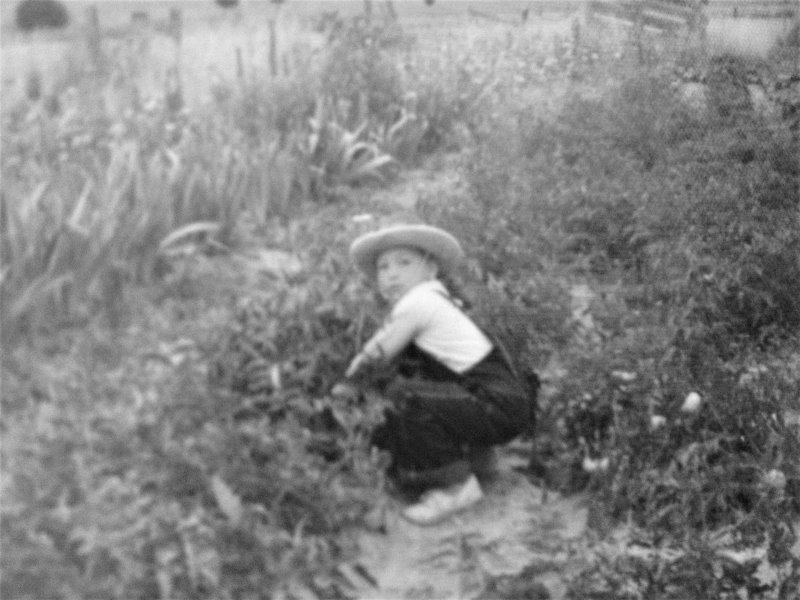 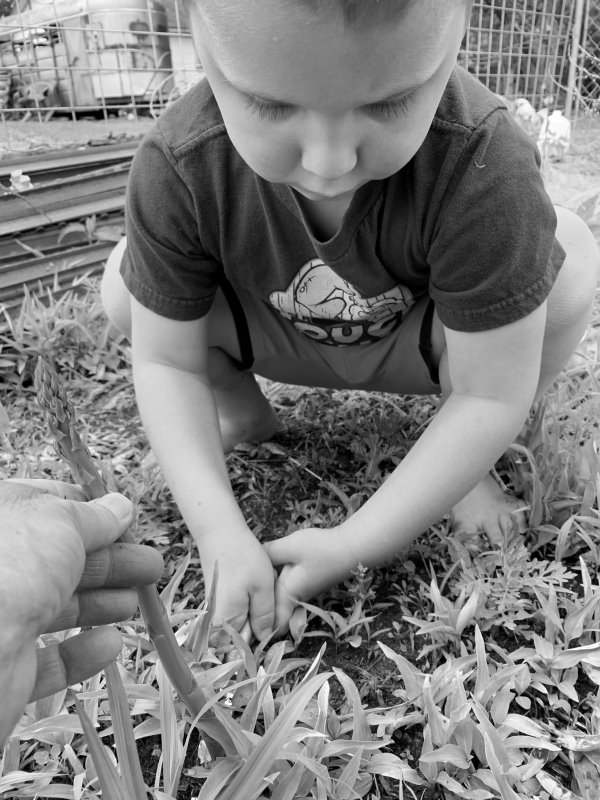 Without much thought, for the past five years I have taken my job as Great Aunt very seriously. It is more like an instinct, like it’s been built into my DNA. Being a GREAT Aunt reminds me of a line from How the Grinch Stole Christmas—"It came without ribbons, it came without tags. It came without packages, boxes, or bags.” Maybe being a Great Aunt does not come from a store. Maybe being a Great Aunt, perhaps, means a little bit more. Okay, okay, so I took some liberties—but you get my drift. The things I have to offer my great nephew do not come from a store. You cannot buy time, and you can’t place a value on it. Perhaps years from now when Brycen has kids of his own, he will look back with fond memories of climbing fences, getting dirt under his nails, helping his Grandma Jo feed the dogs, kayaking across the pond, helping me feed the chickens and water the cows . . . maybe these moments will mean A Little Bit MORE. 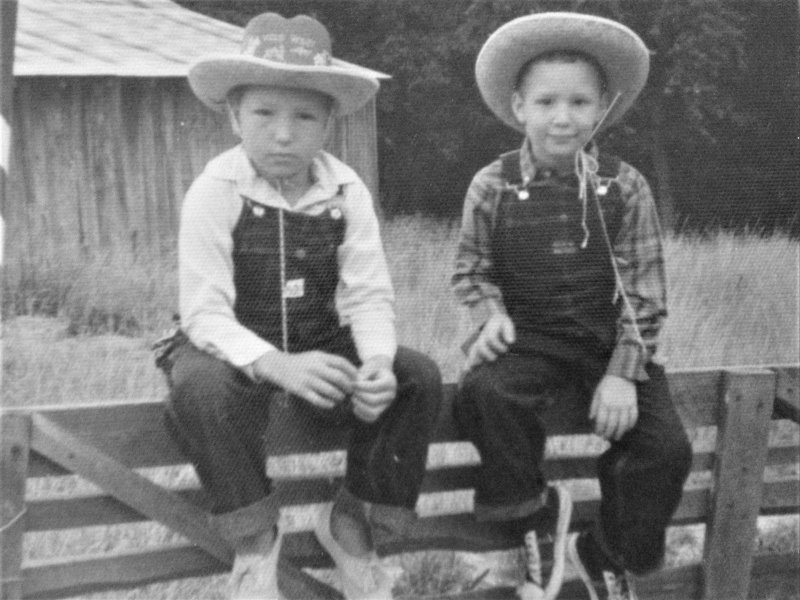 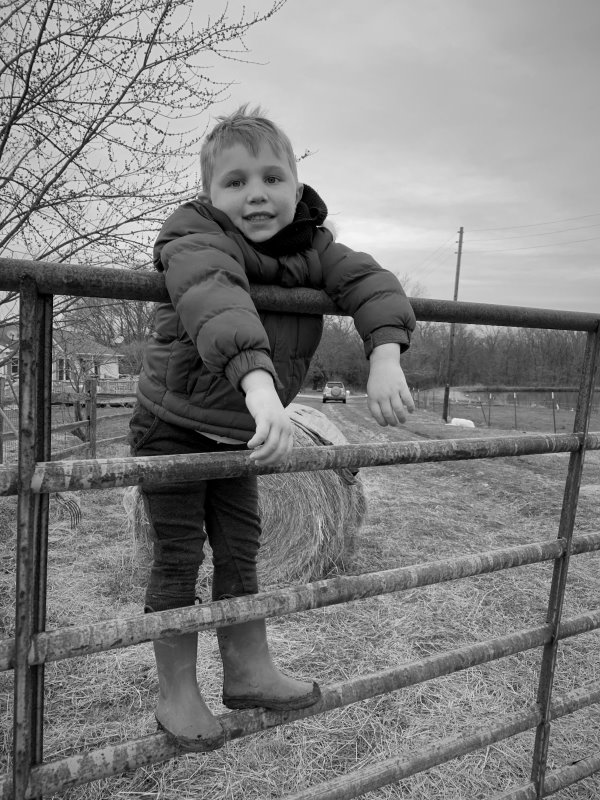 Just this past weekend, my brother and I got into a conversation about Hahn’s Store. We used to go there as kids with our grandparents. The shop keeper, Marie, would walk through the store when you arrived and would go to each section turning the light on for you by pulling the chain. When you were done in that area, you got to pull the chain to turn the light off. My brother and I thought that was so COOL! She had a big old glass case by the front door full of every kind of candy. One time, she was impressed by our manners and offered us any piece of candy that we would like in the entire case. There were handmade peanut clusters, Clark bars, candied cigarettes, fudge, you name it. Mike and I selected Halloween suckers that were about nine, ten months old if not from the year before. I think they were like $0.10 each. You could tell they would just melt in our mouths. They looked delicious . . . and they were! Marie was so taken aback that we skipped over the expensive candy and picked two old suckers that she offered us free candy every time we came back. In talking, my brother brought up how Grandma always had a dish of candy sitting around.

There are several that I can remember, such as red hots, the big orange peanuts, the hard Christmas candy, but the one that was a real stand out to both of us was what we called “Log Cabins.” I am not sure of the proper name, but you can still find them in gas stations sometimes. It was a hard peanut butter–type candy that had dark stripes. I buy a bag every so many years, and I immediately think of my Grandma. Apparently my brother does too. He said he wants to find his own candy to keep in a bowl at his house. He wants Brycen to immediately think of him when Brycen is an adult and sees or has a piece of the candy. So, I guess we all have special little things that bring up fond memories and transport us back in time. That is my goal in being a GREAT Aunt. I want to help create those moments for Brycen that he will treasure for a lifetime. Looking at pictures I have snapped of him around the farm, I notice such similarities between his childhood and mine that it makes me so incredibly happy. My farm has become a memory-maker. Like I said, it took me fifty-one years, three hundred and sixty-three days to become a Great Aunt. Now I am spending my days on becoming a really GREAT Aunt.

Kim Carr is a photographer and mid-Missouri hobby farmer who has combined her love for the country life with that of natural-light photography. Her work reflects my commitment to sustainable agriculture and the humane treatment of all animals. To learn more about Kim, read her interview with Elizabeth Gracen here.

Opinion: Be A Voice For Unity

Oh Lordy! I Have Siblings!