After reading Derek May’s review of the powerful 2018 documentary Won't You Be My Neighbor? about American icon Fred Rogers, I finally got around to screening the film a couple weeks ago. Bottom line—it slayed me. I was profoundly moved, not necessarily because Mr. Rogers' Neighborhood was part of my early life, a show I watched many a day after school with my younger brother, but because I believe that Fred Rogers is probably rolling over in his grave right now with all the hatred and animosity that we as human beings are currently spewing at each other. Our modern world appears to be the total antithesis of what Mr. Rogers was trying to teach us—be kind, compassionate, accepting, and above all, believe in yourself and in the goodness of others.

I think what Mr. Rogers created was art; it was spiritual. And the most interesting aspect of the film is that, even though he was aware of the positive impact he was having on the people around him, he was still full of self doubt and never confident that he was really making a dent in our collective prejudice, selfishness, and lack of self-knowledge. Maybe he was right. Maybe Mr. Rogers shifted nothing in terms of “big scale” changes in our society, but when you look at his life and his intention, you realize that his belief in starting with yourself, working to expand your own heart and mind to grow and evolve into the best version of who you can be and then extending that goodwill to others in any form you can muster—well, that’s powerful.

We’ve always heard that it’s the “little things” that you aren’t even aware of that truly have an impact on those around you—whether that’s your own kids, your neighbors, your family, or even the complete stranger on the street. So, with that in mind, Flapper Press continues our Making the World a Better Place series featuring stories and interviews with everyday people who are doing their best to tilt the world toward the light as they continue on their way, doing both the “little things” and “big things” to help those around them and infuse positivity and hope to the world.

With that in mind, I'd like to introduce you to Jen Snoeyink—an artist, mother, and yet another everyday person doing extraordinary things to make our world a better place.

I met Jen a couple years ago through a mutual friend and gladly agreed to feature her beautiful “Mandala Meditation Stones” on the Flapper Press site for the holidays last year. When I heard about her intention to install yarn-wrapped “Hope Trees” at a handful of Burbank, California, public schools for the beginning of the school year, I had to find out what she was up to. She was gracious enough to let me tag along to document her clandestine art installations. It was a novel experience to watch her zip tie the colorful "Hope Trees" to school marquees and fences in the dark, and the tangible adrenaline rush we experienced when a local police officer pulled up and parked near the last installation added to the excitement—visions of an “art arrest” spurring us on.

After the sun came up and the bells rang all over Burbank to start the new school year, I sat down with Jen for coffee and an interview to talk about the “Hope Trees” and her motivation to create them.

EG: Jen, I know that this project did not originate with the school installations, so tell me about how this whole idea of wrapping branches came about?

JS: The whole idea started after the La Tuna Canyon fire in 2018. The fire came within one block my house, very close—too close. So scary! After the fire was gone, everything was burned, and the hillside was so gray, and it was so sad to look up there. It used to be a haven for animals and birds and all kinds of things. Now, it was this desolate place. I looked up in the hills and thought that I really wanted to throw some color up there, you know? How could I do that? I thought back to an art day project that I did at an elementary school when my daughter went to school there. We had taken branches and wrapped them in yarn and inverted them to look like little potted trees. So, I thought that same idea might be perfect for what I wanted to do now. I started work and created a tree for my yard. It wasn’t up on the hill, but it was close. The yarn has now faded, but I painted it and liked what the paint did to it. So, that’s where it started.

Then, I did some of the same type of trees after the big Woolsey fire happened. I took one of the trees and created a one-day installation up in the Santa Monica Mountains and had a photographer, Kerry Perkins, take a photo of it. One of those photos is in the museum up in Solvang in a California National Parks exhibit going on up there.

EG: Has your theme always been “Hope”? Has it ever been anything other than the “Hope Trees”?

JS: It’s always been “Hope.” The idea was color. Color after devastation. But there’s also something about the image of a tree. For me, it gives me the idea of hope. Renewal. Growth. I use recycled materials: recycled yarn, strips of fabric. All the components came from other sources: Goodwill, donations from other people. Part of the process is ripping the fabric into strips, and I use it however it comes out.

JS: I was actually talking to Kerry Perkins again, and we discussed the horrible tragedy in El Paso, and I said, “Wouldn’t it be great if we could just cure everything with trees?” It was a joke, but then I called him back later and said, "you know, school is starting soon, so let’s give the kids some positivity and approach this from a positive instead of a negative space. Let’s say, 'Kids, we believe in you. Let’s have a year of positivity and hope.'”

After that, I contacted a few of the local schools and principals and the BUSD. I got the concept rolling, and I discovered that when you approach something from a positive standpoint, it’s a lot easier. Everyone got on board. I got the go ahead from Emerson Elementary, Thomas Jefferson Elementary, John Muir Middle School, and Burbank High School.

EG: Do you envision this going any further than this first school installation?

JS: I would love for this to go further than that. I’d love for it to be a first day of school thing and get a lot of schools on board with a bunch of volunteers to fill their campuses with trees. Or maybe offer services to schools where they have the trees installed for a period of time. I know of a couple of LAUSD teachers who think it might be a good idea to have the kids participate in the wrapping and creation of the trees.

EG: Along with one of my biggest long-time collaborators (Hilary Thomas of the Lineage Dance Company), we believe that the arts are the vehicle to transmute pain into something beautiful—into art. Can you tell me your thoughts about the importance of the arts in this country’s school system?

JS: Where I went to school in middle school and high school in Wisconsin, we had no fine arts program. The arts were basically limited to just music. We had choir and band, which is fantastic, but there were no art classes at all. There might have been an occasional visitor who would come in once a week to show us artwork, but there was very little exposure. It was a small parochial school, so I wasn’t exposed to fine art until later in my life when I went to grad school. There are many other schools in Wisconsin with excellent art programs, this was just my experience.

It was in my last year of college as an English major at Calvin College in Grand Rapids, Michigan, that I started to see a lot of theatre. Something clicked in me when I realized that you can actually say things with the stage, with the costumes, with the lighting. For me it became this “art can tell a story” epiphany. Not just fine art, but art all around you. I went on to grad school for theatre design at the University of Michigan and then moved to New York and did design and painting and then eventually to Los Angeles. 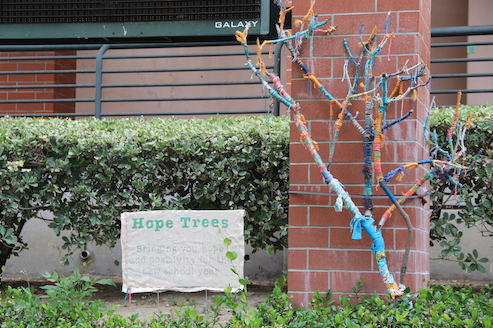 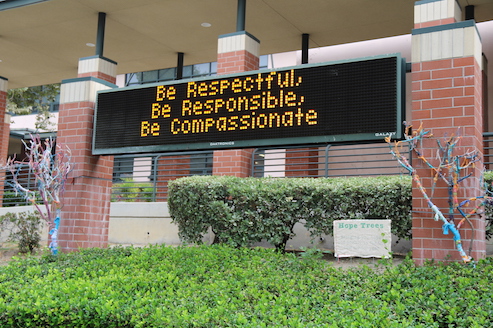 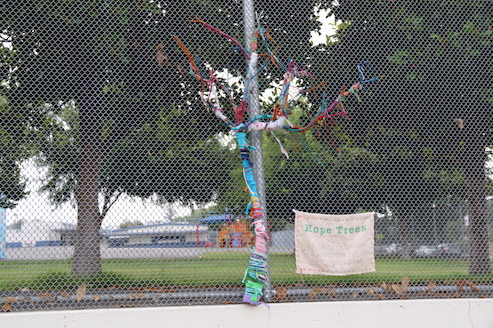 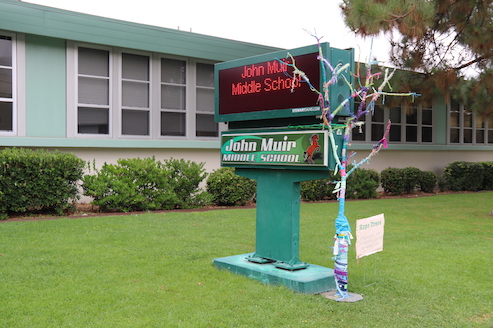 EG: Tell me about your own personal artwork.

JS: Well, there’s a lot of it! I think my artwork is very much geared toward the psychological. For instance, I’ve done henna tattoos on a friend's head when she was going through chemotherapy. I created these mandala transfer stencils and painted them on her bald head. She felt amazing and beautiful during the process. It would stay for about 2 weeks. It would fade, and I would do it again every two weeks.

Abstract art is very much an emotional expression of what I see in nature. It’s all very important to me. Nature and our interaction with it. Like the “Hope Trees.”

The night before Jen Snoeyink's interview was to publish, she sent us her newest creation in the Hope Trees series, this time inspired by the tragic fires in the Amazon—the world's largest rainforest, spanning over 2 million miles in South America—the lungs of our planet that produce 20% of Earth's oxygen. Once again, pain and tragedy have been transmuted into art, and Flapper Press is proud to present Jen's newest, most mysterious work.

"Perhaps it is a look back in time, or a ship in a bottle or a treasure box. It is meant to be observed and explored. 'Hope Trees'—positivity and hope for the Amazon."